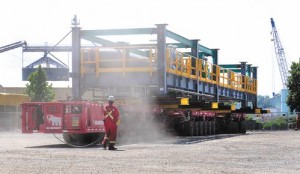 A down-sized megaload kicks up dust as it is moved near the Port of Lewiston Friday. The smaller loads of oil-processing equipment are being transported in Idaho on U.S. Highway 95 to the Kearl Oil Sands project in Alberta, Canada.

Saturday, August 6, 2011 | By ELAINE WILLIAMS of the Tribune The Lewiston Tribune

The bustle of activity surrounding the megaloads at the Port of Lewiston is diminishing.

“The work on the disassembling the modules at the Port of Lewiston is nearing completion,” said Pius Rolheiser, a spokesman for Imperial Oil in Calgary, Alberta, Canada.

A total of 33 oversized shipments that arrived in the fall have been converted into 70 loads, short enough to pass underneath interstate overpasses, Rolheiser said.

The work was completed by a crew of about 300, mostly out-of-town, technicians.

The Korean-made sections of a processing plant under construction at the Kearl Oil Sands in Alberta, Canada, were barged to the Port of Lewiston. Imperial Oil had intended for them to use U.S. Highway 12 in Idaho on their way to Canada, but changed its plans because of delays in getting permits.

The extended timeline prompted Imperial Oil to reconfigure the loads so they could instead use U.S. Highway 95 and Interstate 90 for the Idaho portion of the journey.

So far, four of the 70 oversized hauls have been shipped across the Palouse. One load each is set to go today, Sunday and Monday, said Adam Rush, a spokesman for the Idaho Transportation Department.

Those seven are about 17 feet wide, compared with a standard lane that’s about 14 feet wide. Most of the remaining 70 will be about 24 feet wide, Rolheiser said.

While Imperial Oil has permission from ITD to send the wider of the shipments through Idaho on the Palouse, it’s still working with the Montana Department of Transportation for clearance, Rolheiser said.

Rolheiser declined to specify what issues had yet to be resolved in Montana and directed the question to MDT, which was unable to provide an explanation Friday.

The 70 hauls bound for the Palouse are among more than 100 that Imperial Oil needs to get to the Kearl Oil Sands after they arrive at the Port of Vancouver.

Fifty that were short enough to clear Interstate passes without alterations have started their road journey at the Port of Vancouver, Rolheiser said.

A “number” of additional modules are at the Port of Vancouver now, but Rolheiser said he didn’t know how many of them would come to Lewiston or when they would arrive at Idaho’s only sea port.

ITD has yet to clear any Imperial Oil megaloads for passage on U.S. Highway 12 other than one that was intended as a test run that went in the spring.

The issue is in court in the state of Montana, where the Missoula County commissioners and three environmental groups objected to Imperial Oil’s plans.