Because the Port of Lewiston is at the end of the navigable Columbia Snake River System, it acts as a natural funnel for commodities originating in or destined for the interior Pacific Northwest states and Canada.  This allows the Columbia Snake River System to be the best competitive option, logistically, for industries choosing from national transportation routes.  We want your business!

Cargoes importing or exporting from the Port of Portland or Port of Vancouver utilize the Columbia Snake River System option by navigating through 8 locks and dams, traveling 465 river miles over an average three-day period.  The Port of Lewiston has connected customers to over 32 countries worldwide, handled a diverse range of containerized, specialty, roll on/roll off and break bulk cargoes, and recently extended its dock to 275-feet.

Container on barge service is temporarily suspended. However, starting in Jan. 2018, the Port of Portland announced that Swire Shipping will begin offering container and general cargo service at the port’s Terminal 6. Hopefully, the resumption of container steamship service will lead to the return of container on barge service on the Columbia-Snake River System. To inquire about container shipping status, contact Kim, Port of Lewiston Container Yard Manager, at (208) 743-3209.

Before major steamship lines stopped calling the Port of Portland in April 2015, the Port of Lewiston was one of the primary inland export terminals for containerized wheat, peas and lentils on the West Coast. Agricultural products came from Idaho, Washington, Oregon, Montana, the Dakotas, Wyoming and Canada. The Port of Lewiston is still capable of moving break bulk and specialty cargoes.

Bulk grain shipments continue to move through the Port. The privately-owned Lewis-Clark Terminal (grain facility adjacent to the Port of Lewiston) handled an average of 22,500,000 bushels of grain over the past three years.

The Port of Lewiston has a history working with U.S. and Canadian companies and logistics firms to ship oversized cargo through the Columbia-Snake River Corridor. This oversized cargo has final destinations that include refinery equipment to the Kearl Oil Sands in Alberta, Canada, wind powered generators into the U.S. Midwest and coal fired electrical generation plants…

No vessels are scheduled into the Port of Lewiston at this time. Container on barge service is temporarily suspended. However, starting in Jan. 2018, the Port of Portland announced that Swire Shipping will begin offering container and general cargo service at the port’s Terminal 6. Hopefully, the resumption of container steamship service will lead to… 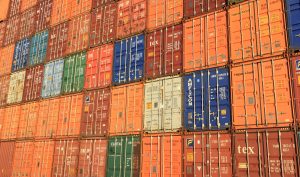 The Port’s location next to US Highway 12 allows to direct link to markets in Montana, while Port’s proximity to US Highway 95 allows for links to Boise, Idaho, and US-84 to the South, and Spokane, Washington and US-90 to the North.

Thanks for your message! We’ll be in touch soon.