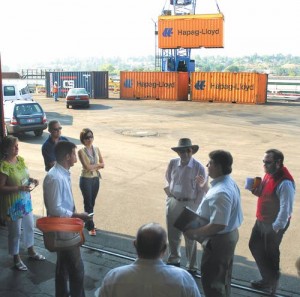 Port of Lewiston manager David Doeringsfeld explains port operations to a group of visitors who work in the media and were touring north central Idaho Wednesday.

Thursday, September 15, 2011 |By ELAINE WILLIAMS of the Tribune The Lewiston Tribune

The Port of Lewiston anticipates barges carrying megaloads will be arriving at its dock about three or four times a year in the future.

“It’s not going to be a constant stream of cargo coming up here,” said David Doeringsfeld, manager of the Port of Lewiston.

The remark came while Doeringsfeld was speaking to a group of out-of-state journalists touring north central Idaho. He was responding to a question from Joe O’Reilly, of Inbound Logistics, a publication based in New York City that circulates among shippers.

The Port of Lewiston has been recruiting the new type of business partly because until now the majority of its shipping has been outbound agricultural commodities, along with paperboard and pulp from Clearwater Paper.

All of the recent publicity surrounding oversized loads has put Lewiston on the map in terms of being a place where large shipments can be off-loaded from the water onto trucks for road journeys into the United States and Canada, Doeringsfeld said.

Ideally, components would be added to the cargo, creating opportunities for technicians such as welders or electricians, Doeringsfeld said.

Exactly how many megaloads will be shipped to the Port of Lewiston has been a key concern of opponents.

Imperial Oil originally planned to send more than 200 on U.S. Highway 12 in a single year and were supposed to begin last November. The rigs would be carrying Korean-made pieces of a processing plant to be constructed at the Kearl Oil Sands in Alberta, Canada.

So far, only one test module has gone because the oil company hasn’t been able to secure permits for the loads to move through Idaho or Montana on U.S. 12. Many of them have bypassed the port altogether, and the ones that arrived last fall were shortened so they could use Interstate 90 via U.S Highway 95.

Opponents allege the improvements Imperial Oil made in Idaho and wants to make in Montana on the route will pave the way for hundreds of other shipments that take up two lanes of traffic.

Doeringsfeld was one of about a dozen people in Lewiston who made presentations to the group. The visit was sponsored by the Idaho Department of Commerce and consisted of writers who work for travel and outdoor publications.

The visits in northern Idaho cost the state about $4,000, but the state anticipates getting about $24,000 in free publicity from articles the writers will submit for publications, said Bibiana Nertney, a spokeswoman for the department.

The writers paid for their accommodations and transportation to Idaho. The state covered some of their other expenses, such as rental of a van to transport them, Nertney said.

The group got a glimpse into a number of industries including agriculture, boat building and ammunition making. Arvid Lyons, manager of the Lewis-Clark Grain Terminal, said his employer has a grain pile in Clarkston after filling its 51/2 million bushel storage facilities.

Soft white wheat is going for about $7 a bushel, as much as $2 more per bushel than last year, but farmers did well enough in 2010 that many of them probably still have money in the bank and are not extremely eager to sell, Lyons said.

The issues facing boat builders are different. Custom Weld saw its payroll grow to 100 people in 2007 before the economy tanked. It still has 40 people, but it’s made a lot of adjustments.

All of its suppliers are trying to keep inventories low to keep costs down, so a component that previously would have taken three days to get now could be three months out, said Spike Kennedy, production manager of Custom Weld.

Just down the road from Custom Weld, ATK, the largest maker of military ammunition in the world, is thriving, employing 1,093 at its Lewiston sites, said Dustin Campbell, continuous improvement manager.

Williams may be contacted at [email protected] or (208) 848-2261.© 2011 The Lewiston Tribune. All rights reserved. This material may not be published, broadcast, rewritten or redistributed.